I was first introduced to the Puyuma, an aboriginal tribe located in Taitung, in south east Taiwan, when I was 16; my Grandfather offered me an opportunity to participate in the Monkey Ceremony during December. I accepted, not knowing what to expect as my Grandfather, a member of the Puyuma, had no idea either. My grandfather did not have the fortune to experience his aboriginal heritage, at a young age he left Taitung and moved to Taipei, the capital, to find better schools. Now that I was eligible to participate in Tribal events, I decided this rare opportunity should not be squandered. It isn’t every day that one gets the chance to be a part of a tribal tradition, thousands of years old, and that today has less than 10,000 members. 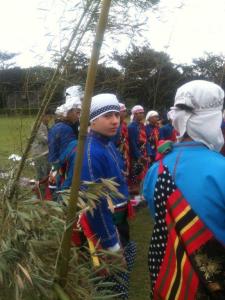 For the past 3 years I was able to participate in many of the tribal activities and festivals including the Monkey Ceremony, the annual hunting trip, the Sea Ceremony, and the Harvest Festival. Since then I have been included as a member of the Puyuma tribe and I too see myself as one. From this inclusion in aboriginal culture, and as my interest and curiosity regarding the Puyuma increased, I was motivated to investigate on my own to learn more directly instead of solely through the involvement in Tribal traditions. Not wanting to spend all summer in a library, I chose to investigate a particular aspect of the Puyuma culture that fascinated me: architecture. The architectural prowess of the Puyuma is well known to many of the other tribes in Taiwan.The most notable example of which is the Puyuma’s men’s training house. At approximately three stories tall, this bamboo structure can hold up to 30 grown men. Traditional structures are made completely out of materials found in the local environment, without any nails or cement; therefore, massive structures are ingeniously held in place using only lashings and physics.

In the beginning, to get a sense of direction, I sought out a professor Chen Wen-Te at the national research university, The Academia Sinica, who was referenced to me by the Taipei aborigine museum.  Professor Chen has helped guide me through my project and continually provides me with suggestions on how anthropological fieldwork would be conducted. Throughout the entire process, we have been corresponding regularly and the continuous advice has been of tremendous value.

Consulting with my aboriginal uncle, who just so happens to be a trainer of young men, we decided to build a traditional Puyuma family house, called a “Shih-Reer” on our family’s plum orchard in the mountains north of Taitung. My Uncle “Shiao Zhong”, and his father “Da Shan” are community leaders and they not only helped me build the house but hosted me throughout the entire project. Also, they recruited the help of a master builder and skilled bushman known as Master Pan. Together and occasionally with some outside help over the course of four months from June to October, we collected all the necessary materials, weighing in around one metric tonne, and constructed a traditional Puyuma house using only traditional methods and skills.

After picking out the location the first step was to collect all the necessary materials: Timber for posts, bamboo for beams and walls, vines for lashing, and elephant grass for thatch. Collecting the building materials early is absolutely crucial as many items need time and preparation before use. First, I feel the need to state that when collecting the materials no actual measurements were made. The building master would work till he felt that there was enough, and most times Master Pan, would work way past my endurance levels. Another reason to consider a Puyuma abode as a wonderful alternative living shelter is its ecological factor. The ecological costs of the materials used are a lot lower to that of a concrete structure of the same size. First, bamboo and wood are much lighter than concrete and everything we used can be found in the immediate area, practically getting rid of all transportation costs. Also, the only construction cost is purely manual labor without the use of harmful chemicals that are usually associated with conventional buildings.

The materials I used surprised me with their versatility and durability. The trees we used as columns would hardly budge after they were secured and would even begin to sprout fresh branches after being completely removed of
their roots. Cutting down the trees was the easy part, dragging the logs through the dense undergrowth was another matter; fortunately, the ingenuity of Master Pan saved us a lot of sweat and grief. He constructed a harness connected to the logs with the very vines hanging around us, which allowed us to drag them through the forest with ease. 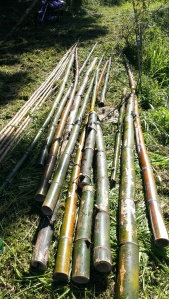 Next comes the bamboo, which has recently become the greatest plant in my opinion for its strength, durability and aesthetic qualities. Retrieving the bamboo in its natural environment was a challenge, the thick bamboo needed for construction grows in large dense patches, where getting through, let alone getting into the thick of the patch, is nearly impossible. No wonder the Puyuma would grow this thick bamboo along the perimeter of villages as a natural defense. An interesting detail regarding these bamboo thickets is that they grind up against one another creating an eerie sound closely resembling that of an animal cry. When I first heard this noise while in the bush, I was fairly convinced there was some creature very close by.  After maneuvering our way into the bamboo patch, Master Pan had to climb up 2 meters into the bamboo thicket to cut down the ones we wanted. We used two varieties of bamboo the thick ones and the shorter thinner ones which were much easier to handle, more than half of the entire structure’s mass consists of bamboo, as we used it to create the scaffold, roof beams and walls; the bamboo was so strong in fact, that it even supported the weight of seven full grown men while they worked on the roof. 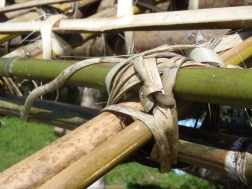 Then the lashings we used to hold everything together. The vine lashings were made from giant vines that resemble bamboo and are covered in inch long spikes. To obtain the vines we had to pull them out of the trees and cut away the outer layer of spikes, the process is tenuous and risky as well: the spikes have been known to maim and even blind people on occasion. After which, the flexible yet sturdy heart is gathered to create the lashings. The heart of the vine is cut into quarters and left to soak in water before use the next day. The lashings can provide a tighter knot than nails and grooves and its flexibility ensures that there will be no tearing, the vine knots also have a natural aesthetic quality that cannot be matched by conventional tools.

is considered very valuable for its popularity as a traditional construction material and because of its long growing period of 2 to 3 years. Elephant grass was favored among the aboriginal tribe because of its ability to keep the rain out, ventilate smoke and regulate temperature as well. The most significant benefit of a thatched roof was that it would last 5 years and when the time arrived to repair the roof, no thatch need be taken off instead a new layer is simply added on. Therefore, tribes had to allocate the amount of grass a

building project gets and when. Each family would plant their own patch of elephant grass and when the community needed it, the family would donate its crop and in return when they are in need, their neighbors would do the same. In some ways this tradition still lives on today, when I was building my thatched roof I would find and cut a patch of elephant grass and donate it to the local tribal community, as they receive fresh cut grass, in return I would receive already dried out thatch for my project. To construct a thatched roof the Puyuma have an innovative method of holding over 100 kg of grass together. A layer of thatch would be spread evenly across the roof and then clamped together between 2 pieces of bamboo. Dozens of layers upon one another thus creates a thick mat of thatch that can keep even the heaviest rains and strongest winds of Taiwan’s infamous typhoons out.

After the four month ordeal of building a traditional Puyuma family home that ranged from the summer months of June to October, the house was complete. The interior was furnished with a bench made from a single betel nut tree, bamboo shelves, a bamboo bed, and a 3 stone prop to place a pot for boiling water and cooking. To celebrate the home’s completion, friends and relatives gathered. Even the local Shaman came and performed the cleansing ritual to ratify the structure as a legitimate Puyuma family house. To complete the ceremony I lit the first fire to create a meal for the guests.  From my experience this summer I have come to a deeper understanding of what differentiates the Puyuma from the other Taiwanese tribes. My knowledge of the Puyuma has developed beyond simple facts and knowledge that can be taught through a book, I am beginning to understand the meaning behind what it means to be a member of the Puyuma tribe, which can be described in their motto: “selflessness, humility, and broad mindedness.”